Owner and creator of Simply Marcella, Michigan’s most chic custom pearl jewelry boutique, Marcella Costin is an expert at bringing dreams to life ,and with her gregarious nature and ready laugh, she welcomes you into one of her finest, The Queens Head Wine Pub.

In addition to her stint as acting Tap Master, Marcella is the official Queens Head Wine Taster.

In addition to his duties as Adjunct Tap Mater, John is also the official Beer Taster to The Queen.

Wade Canell, Chef at The Queens Head, is a native of Cheboygan Michigan and a professional chef with an extensive management and leadership background. He brings to The Queens Head a relentless devotion to excellence.

Before embarking on his path to culinary excellence, Wade proudly served in the United States Navy and conducted three deployments to Iraq. In 2013, following his service in the military, he attended Culinary School at Northern Michigan University, taking courses in baking, cookery, restaurant management, sanitation, menu writing, food costing and purchasing. He received his Culinary Arts degree and went on to earn a Bachelor of Science degrees in Hospitality Management and Business Management, at the Northern Michigan University in Marquette.

While in school, Wade worked as a line and prep cook at The Historical Landmark Inn, Upfront and Company, and The Vierling. After graduating, he became a Chef Instructor at the Les Cheneaux Culinary School in Hessel Michigan. Now, Wade is back in the kitchen to bring you culinary delights at The Queens Head. For Wade, his kitchen isn’t a job: It’s a calling which rewards his hard work and high level of drive and determination. 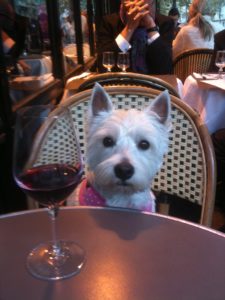 Meet our Miss Minnie Pearl!  This 13 year-old Westie has been with us her entire life and has spent many (or should we say “Minnie”) hours in the Simply Marcella boutiques.  Not only is Minnie Pearl a boutique dog, but she is a world traveler!  She grew up in St. Clair, Michigan, but spent two and a half years of her life in Helsinki, Finland, where she learned to LOVE the snow. Winter is Minnie’s favorite season! In addition to living in Helsinki, Minnie has traveled to other countries including Holland, Canada and France where she has been seen at a wine café or two.  Minnie Pearl’s favorite hobbies include boating, swimming, belly rubs and most of all, she enjoys her 8:00 pm Kong Time!

Hello Miss Marla May!  This darling little Westie was adopted by the Costin family (Marcella, John and Minnie) in December of 2017.  She quickly found her way to the center of their hearts.  (Well, maybe not Minnie Pearl’s quite yet, but she is getting there.)  Marla May was a breeder dog and had several puppies in her first seven years of life. Every day is a joy for Marla!  She wakes up with her tail wagging and bounces her way through the day.  Marla May is beginning to enjoy traveling and a little bit of boating, but she prefers most of all to be curled up next to Marcella or John (and even Minnie)!  Ask Minnie Pearl about Marla May’s morning kisses!